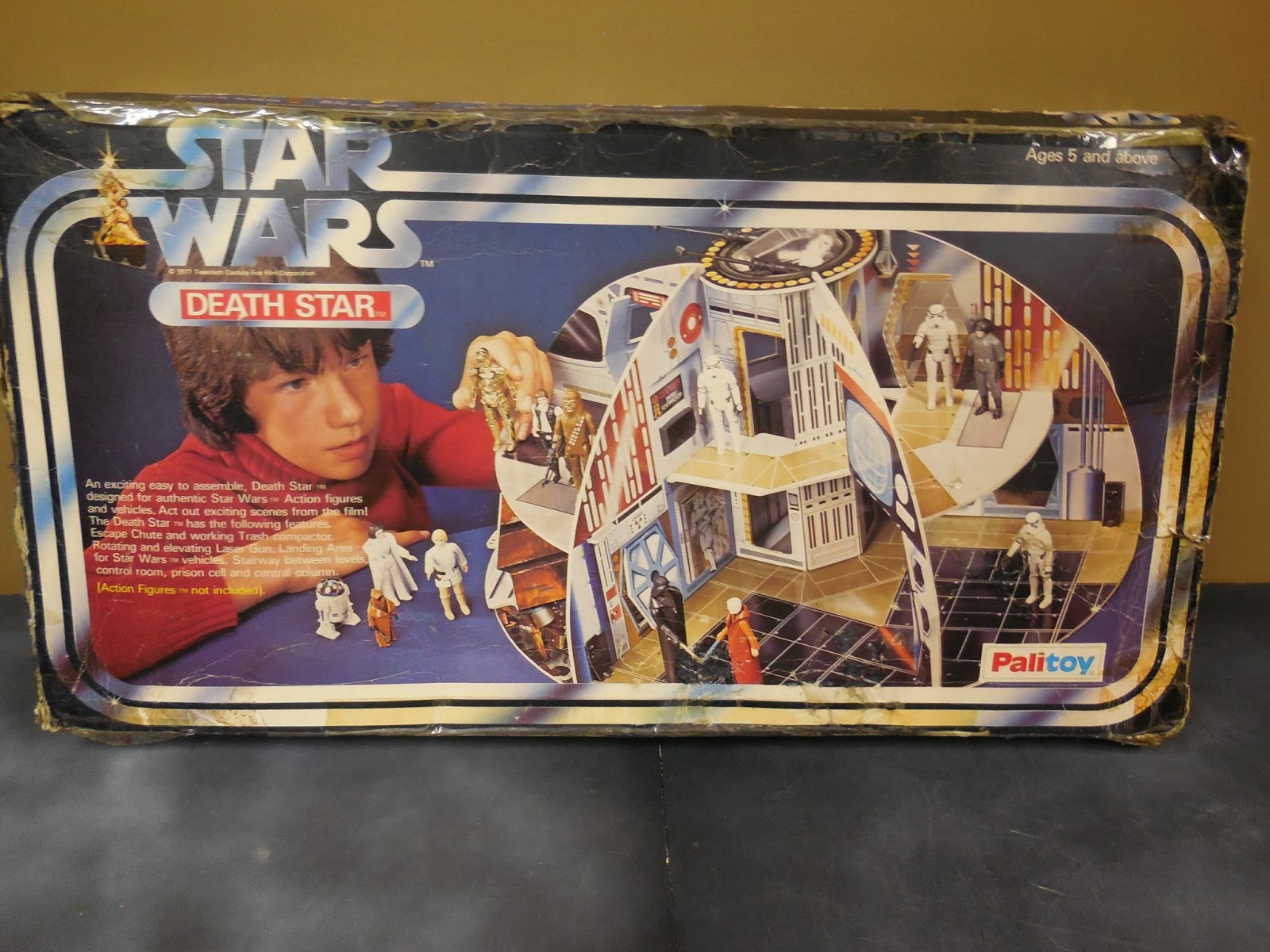 Every collector has a "grail" item - something that they long to have, that just has some special appeal. Usually the grail is rare, and most often it's expensive. For production Star Wars collectors, it can be something foreign, or unusual. For me, this item is all of those things - it's the infamous chipboard Death Star playset. 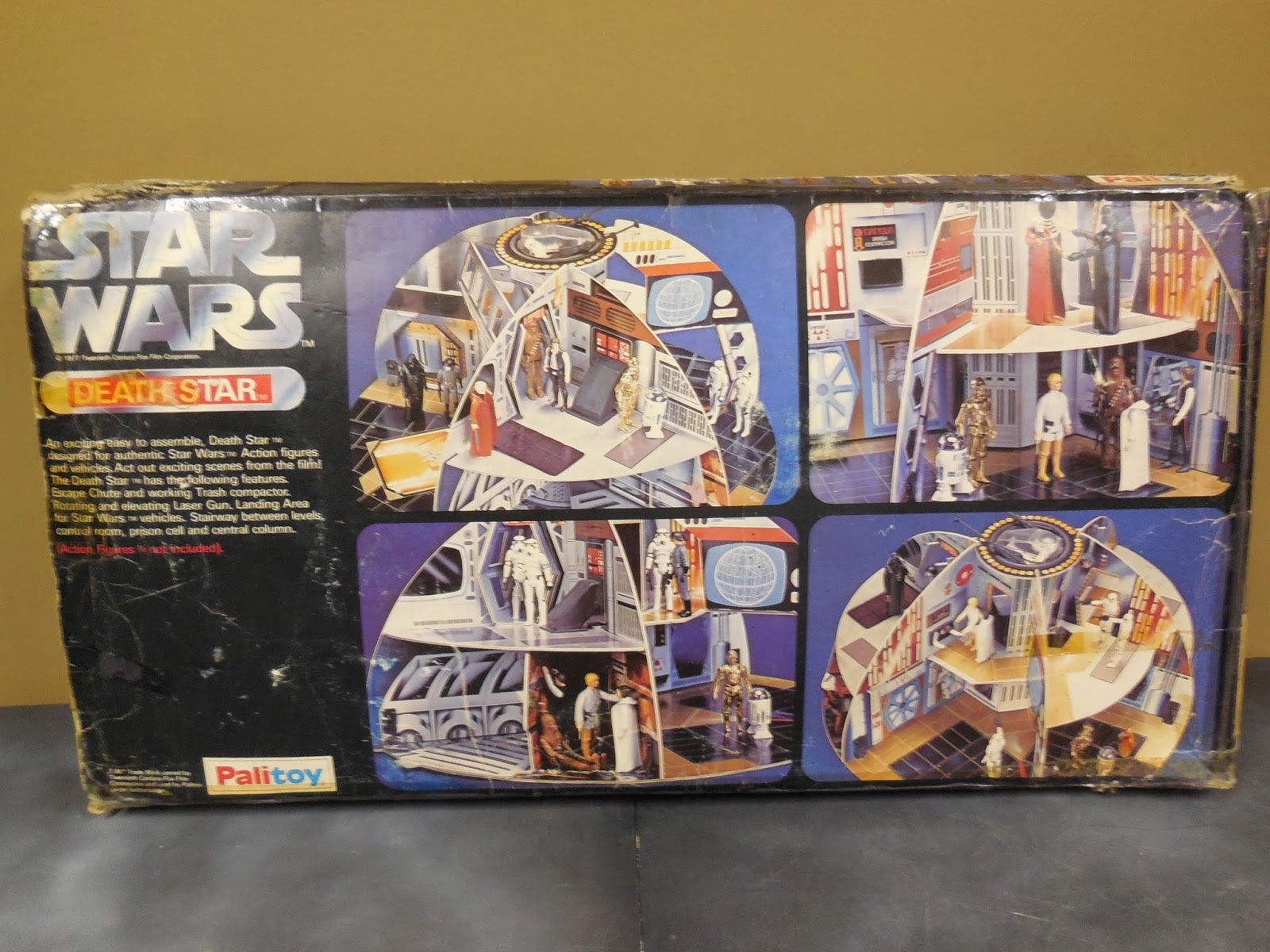 As you can see from the packaging, this is the Palitoy (UK) version of the playset - it was also released in other markets including New Zealand, Australia, France and Canada. Although we here in Canada were the only market to get both the Kenner (plastic) Death Star playset and this chipboard version, the Canadian card Death Star is even more difficult to find than Palitoy's and I've "settled" on adding this UK version to my collection. But I'm not disappointed - far from it. This is the coolest playset I own, and by some margin at that. 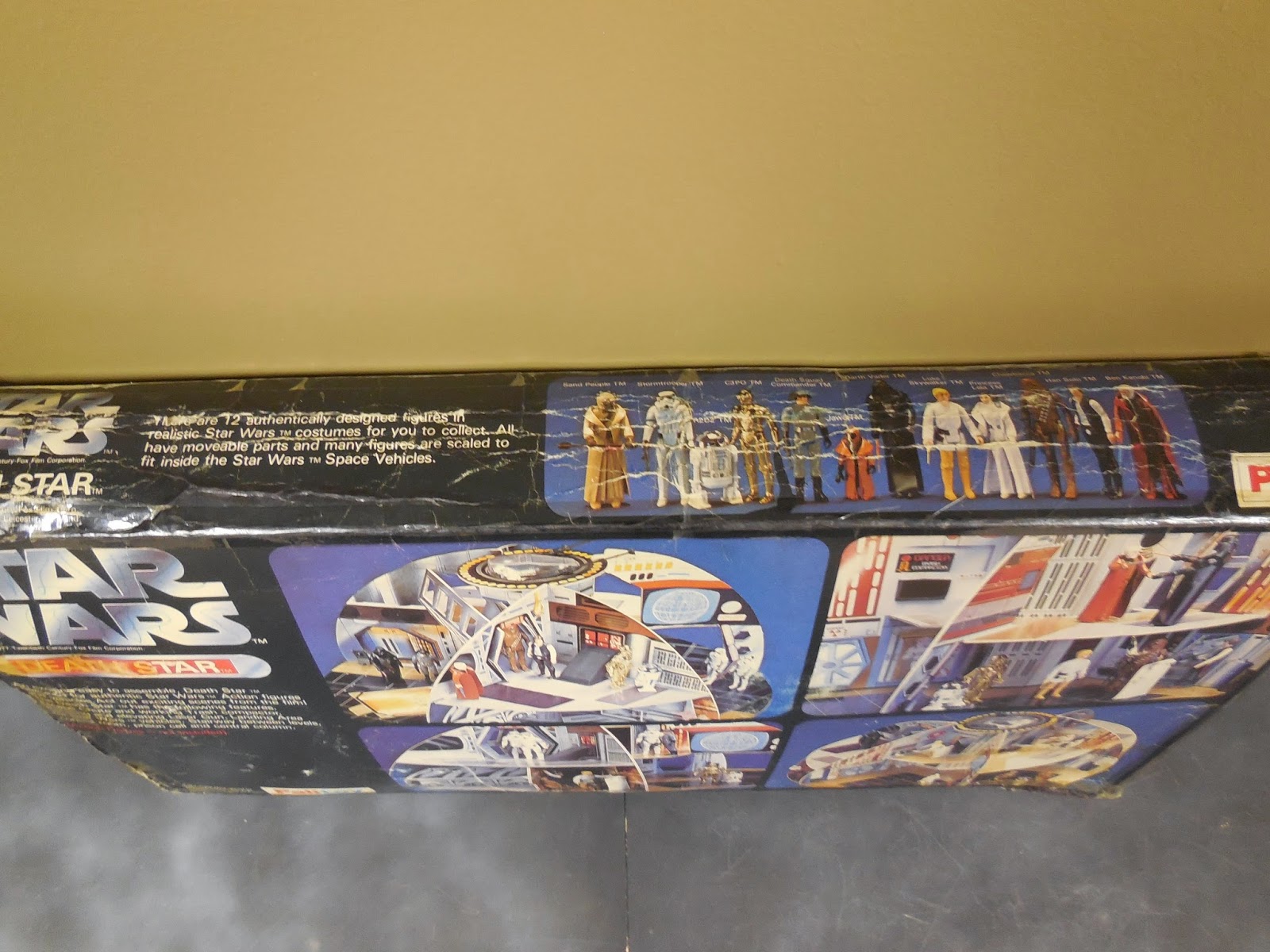 The box is in admittedly lousy condition but I'm happy just to have one with the toy. Even though it's a Palitoy item the box design carries all of the classic Kenner hallmarks - colourful photography, sharp design and that iconic racetrack on the front. 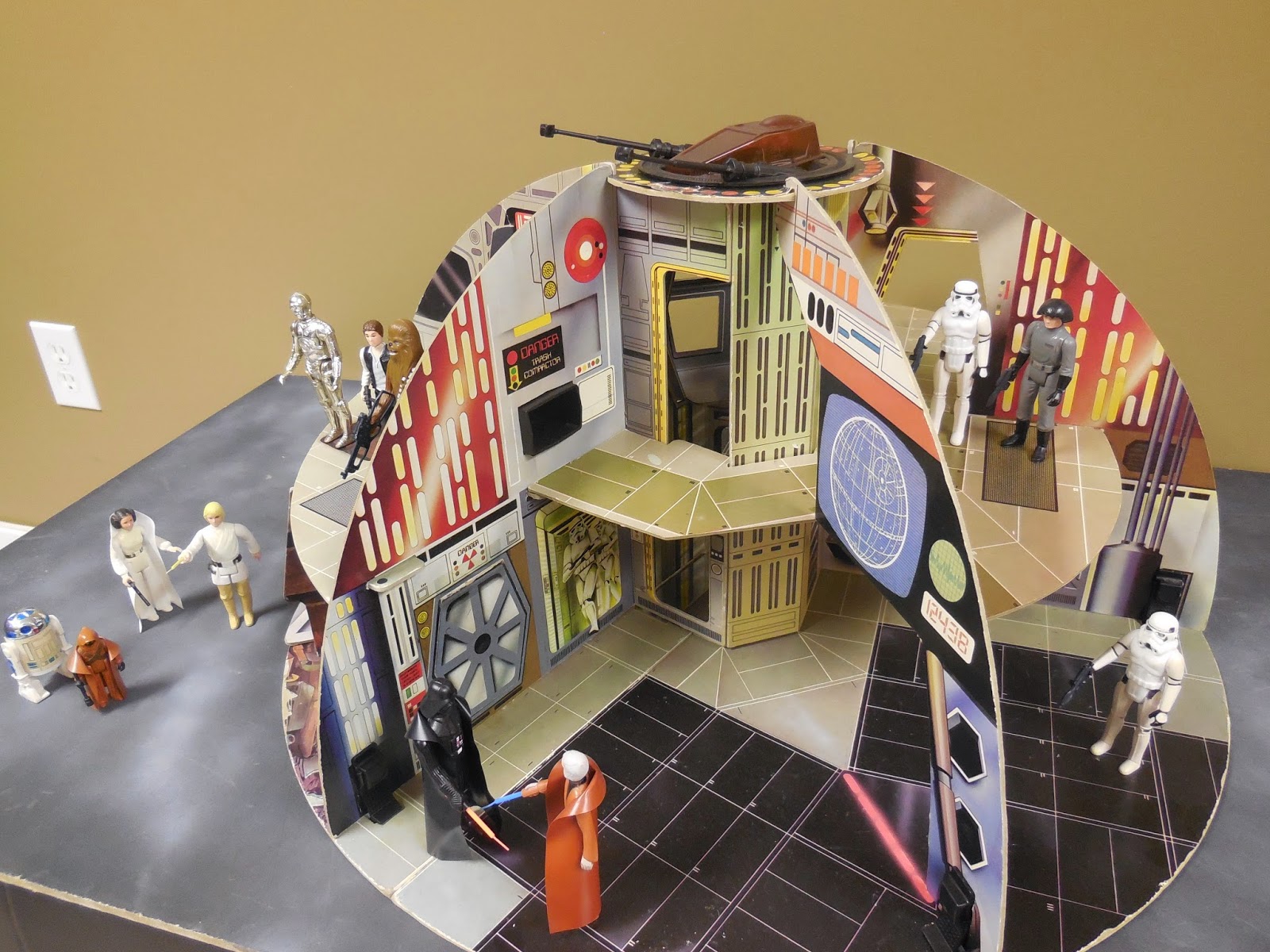 Here it is, assembled. It's actually reasonably challenging to put together, and I wouldn't recommend trying it for the first time without referring to the instructions. The components are a thick card I have heard referred to as "chipboard", combined with some plastic components - the five two-piece base connectors, the trash chute, the top gunner's cockpit and canopy, and the two cannons pinched from the X-Wing Fighter toy. The set also included some small clear plastic figure stands, but these are long gone from my set, which is fortunately otherwise complete. 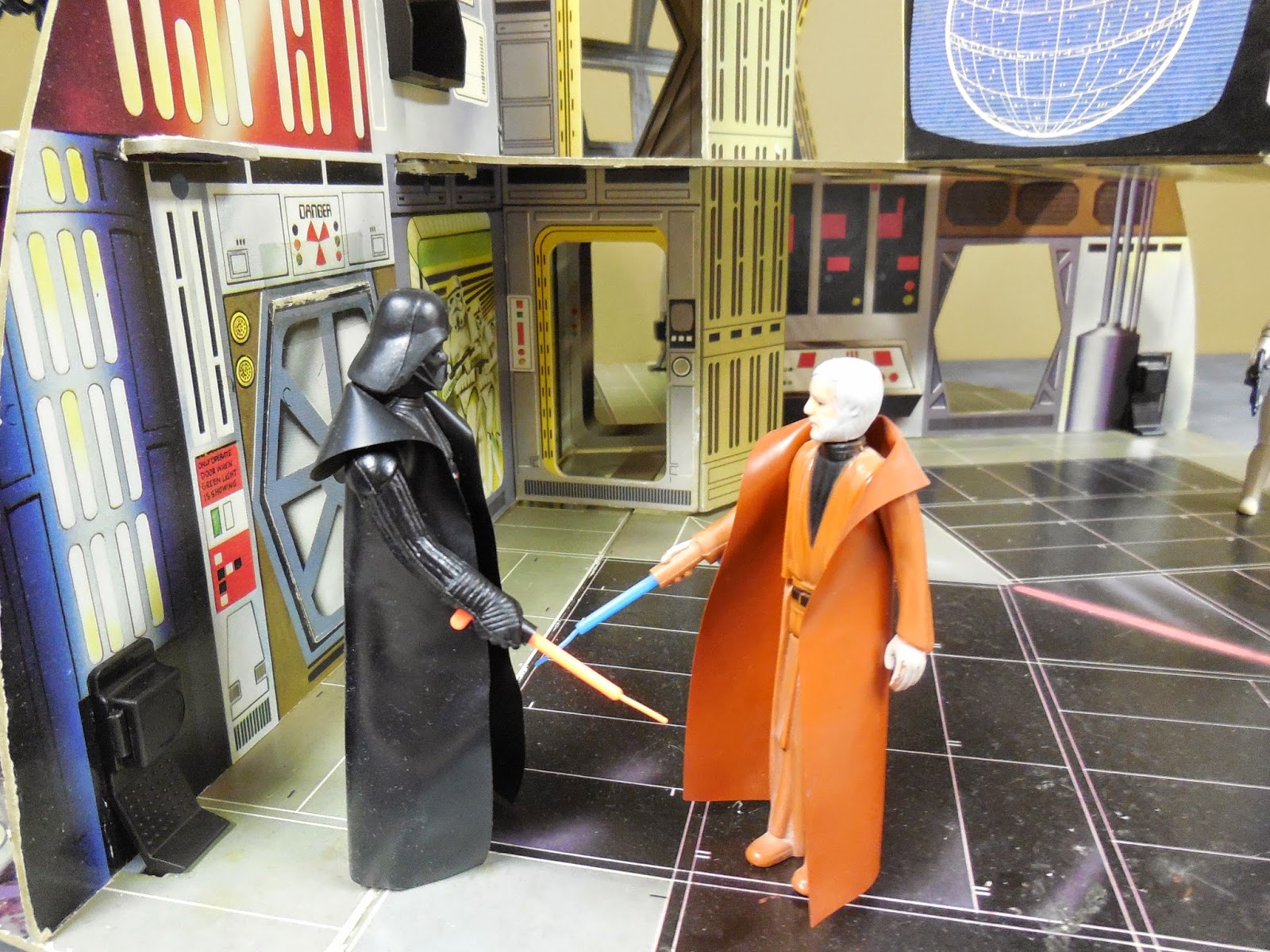 The detail packed into this playset is amazing. Every inch of the walls is covered with Star-Warsy goodness. Here Darth and Ben battle in front of the trash compactor escape hatch. 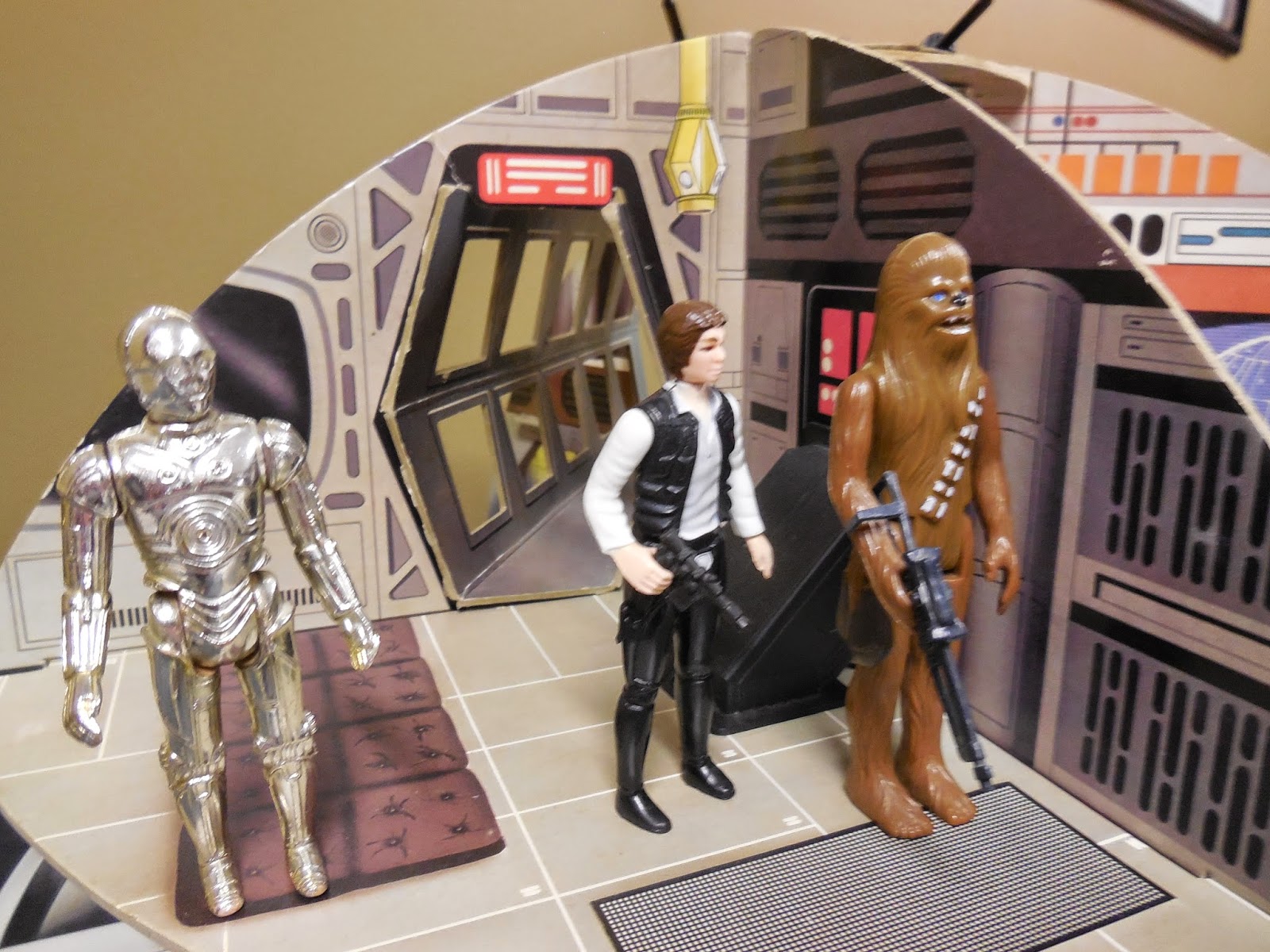 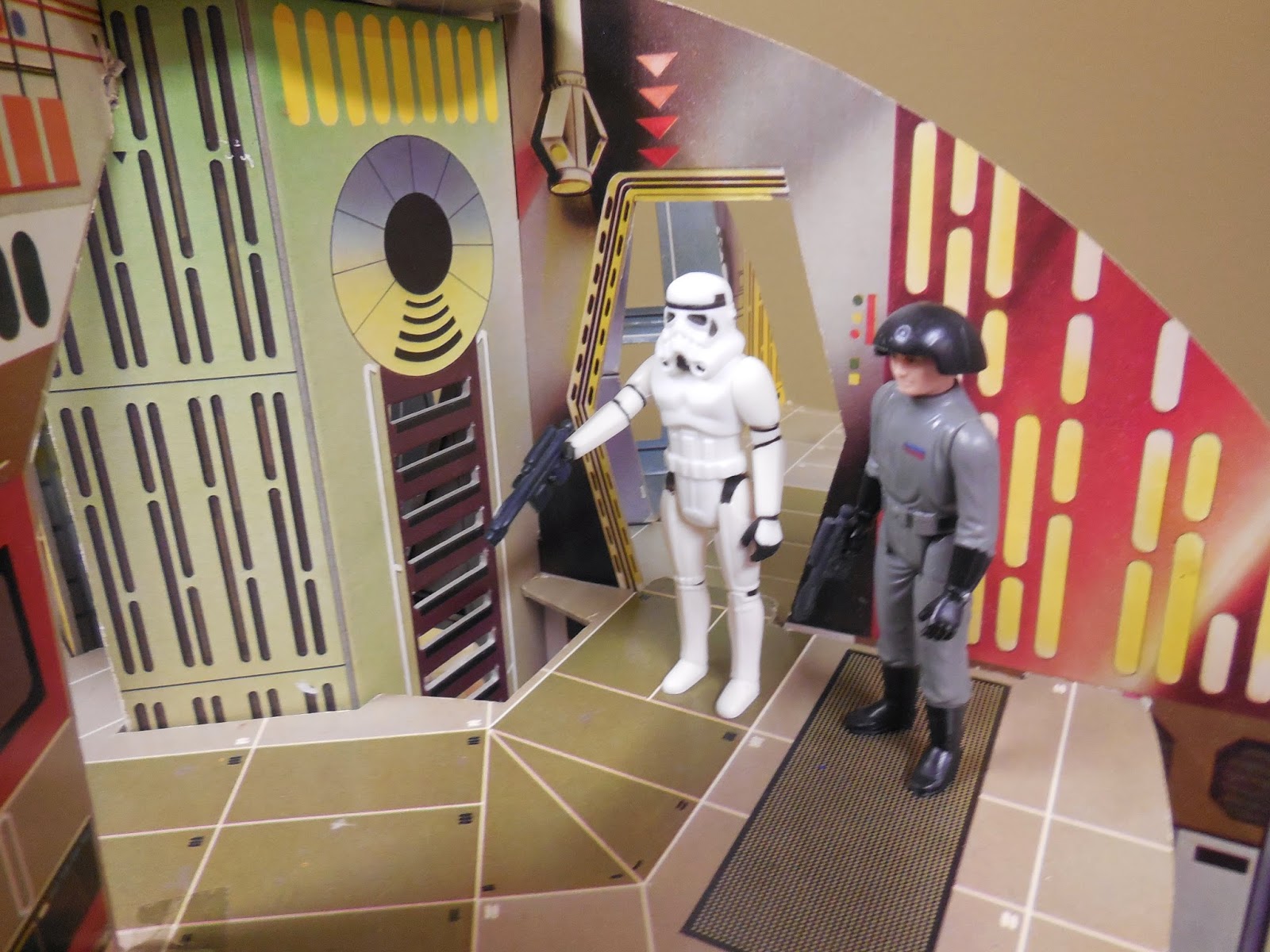 Trash chute drops figures straight into the compactor - complete with moving walls. The hatch at right opens to allow heroes to "escape". 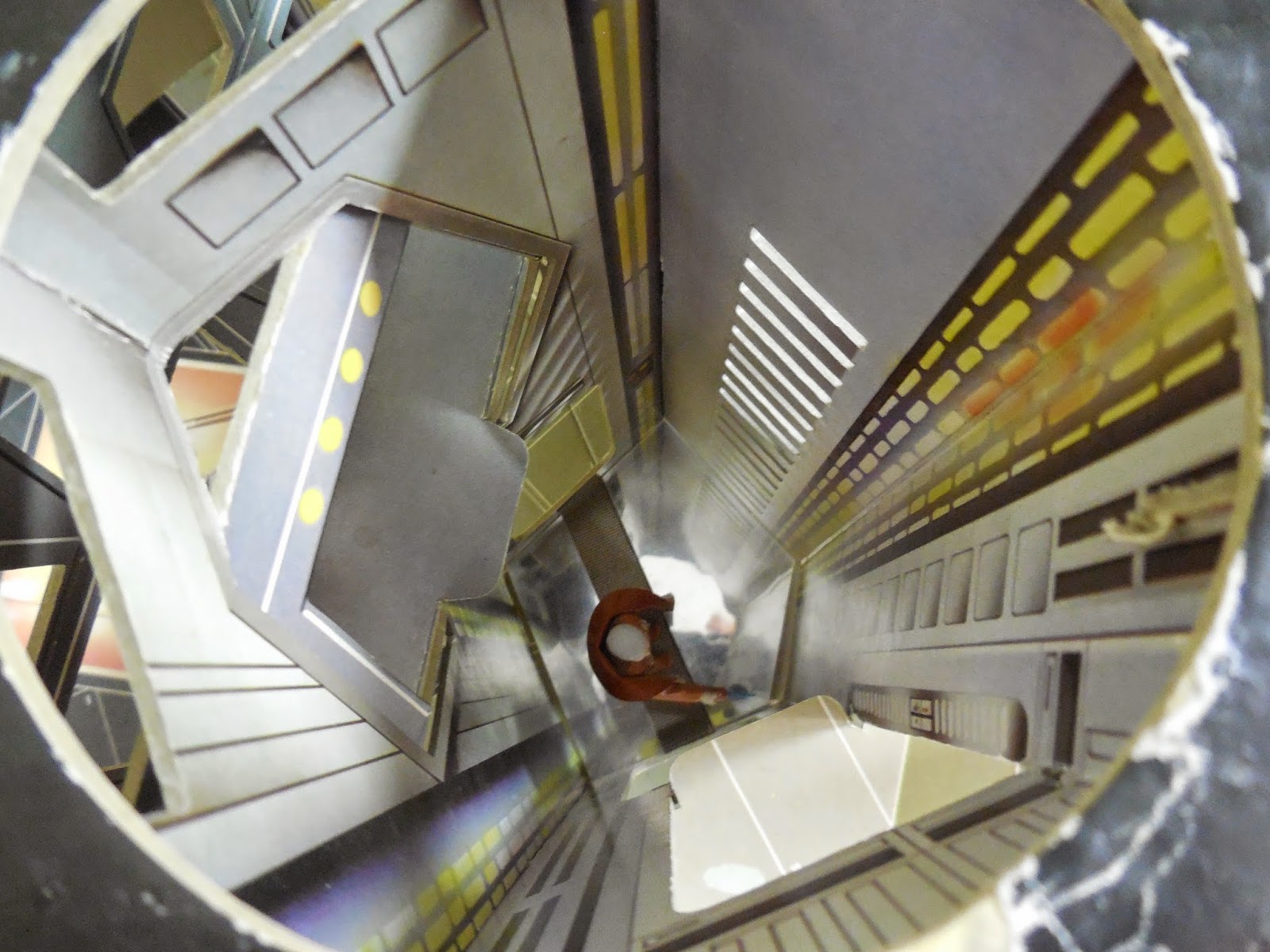 The mirror at the base reflects the walls, giving the illusion of a bottomless shaft. Ben searches for the controls to the tractor beam. 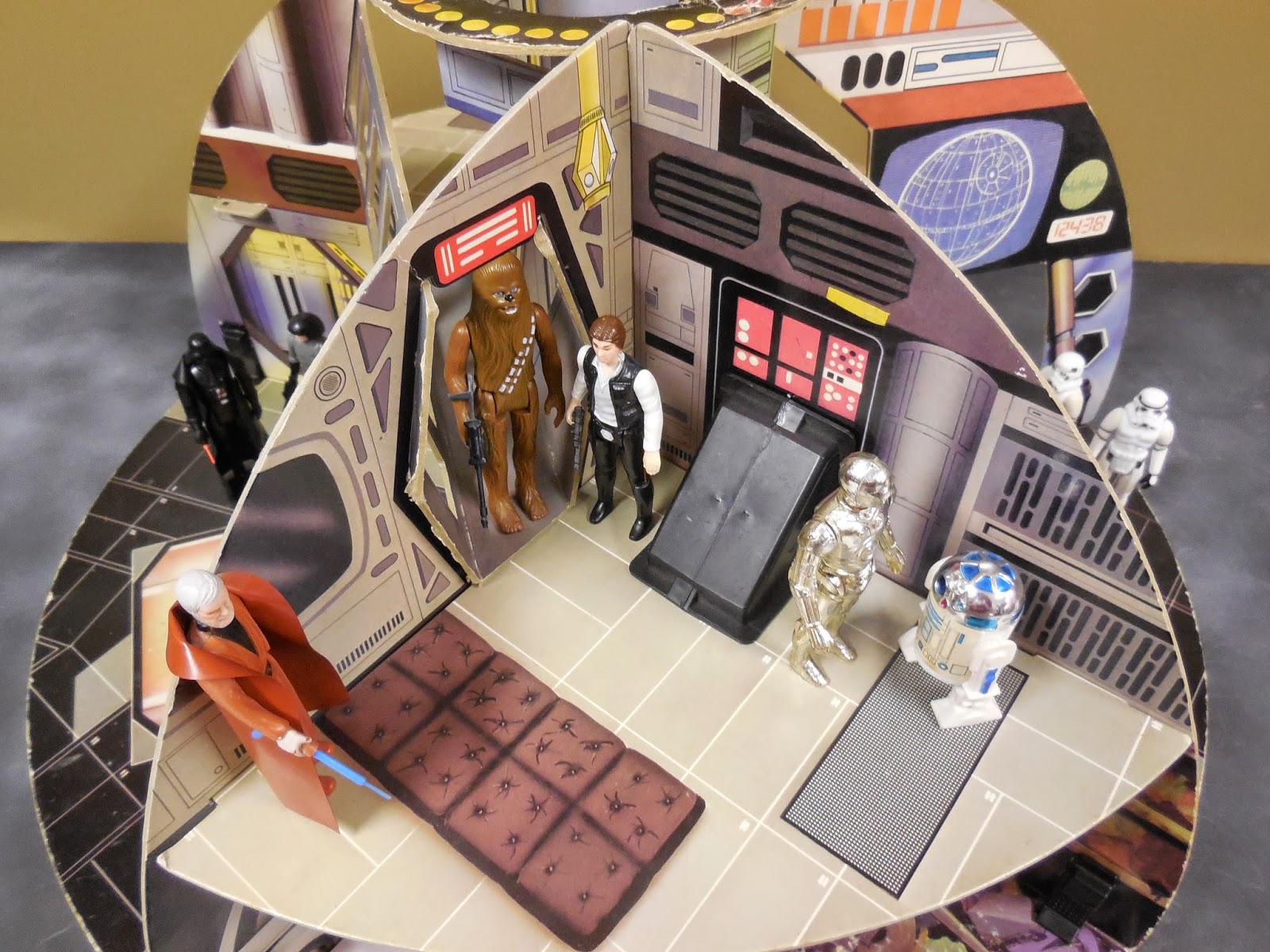 Back to replicating the box shots. One of the rooms represents the Princess's cell. Either that or Vader's bedroom... 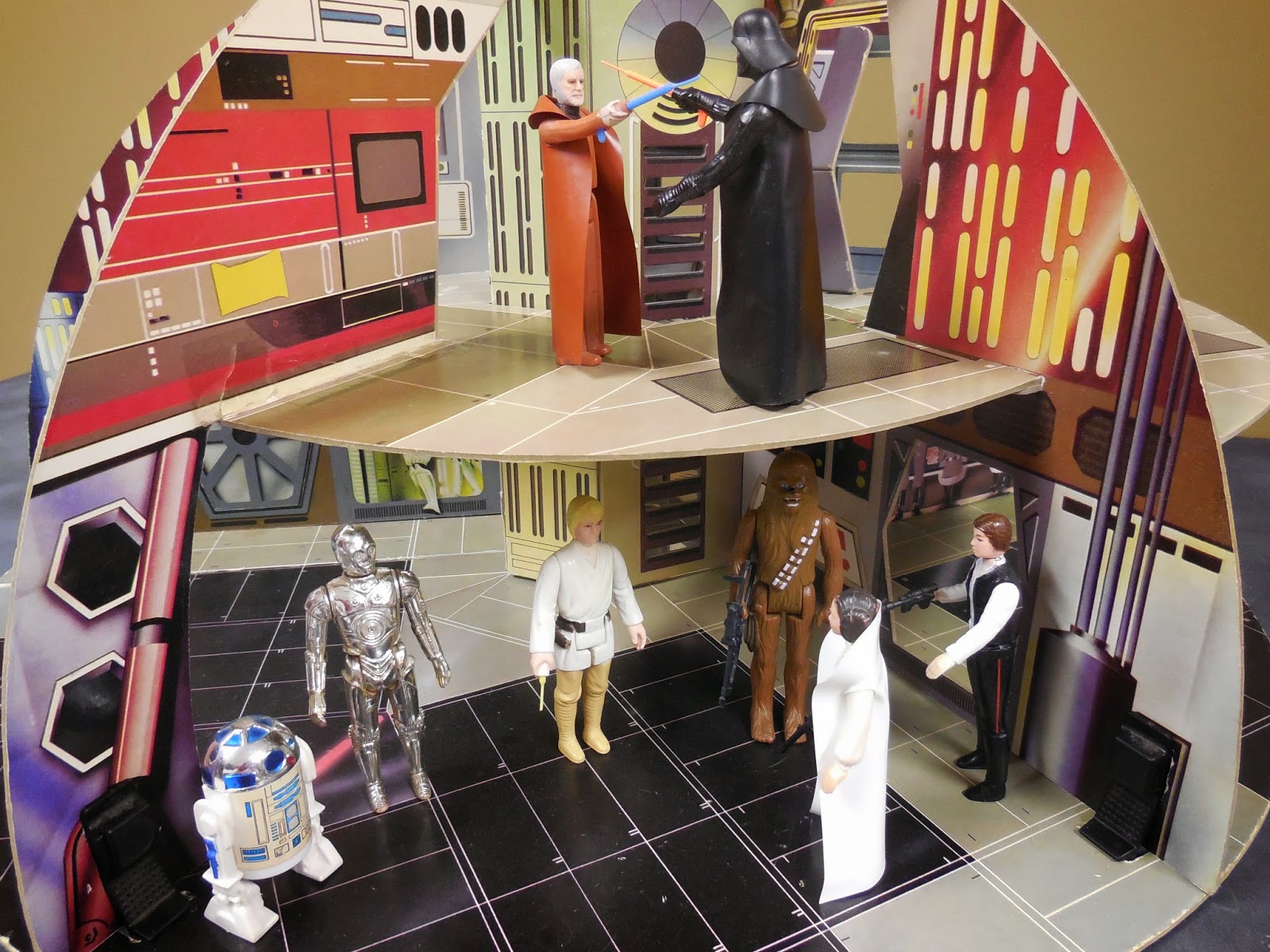 The heroes engage in discussion while Ben battles Vader. 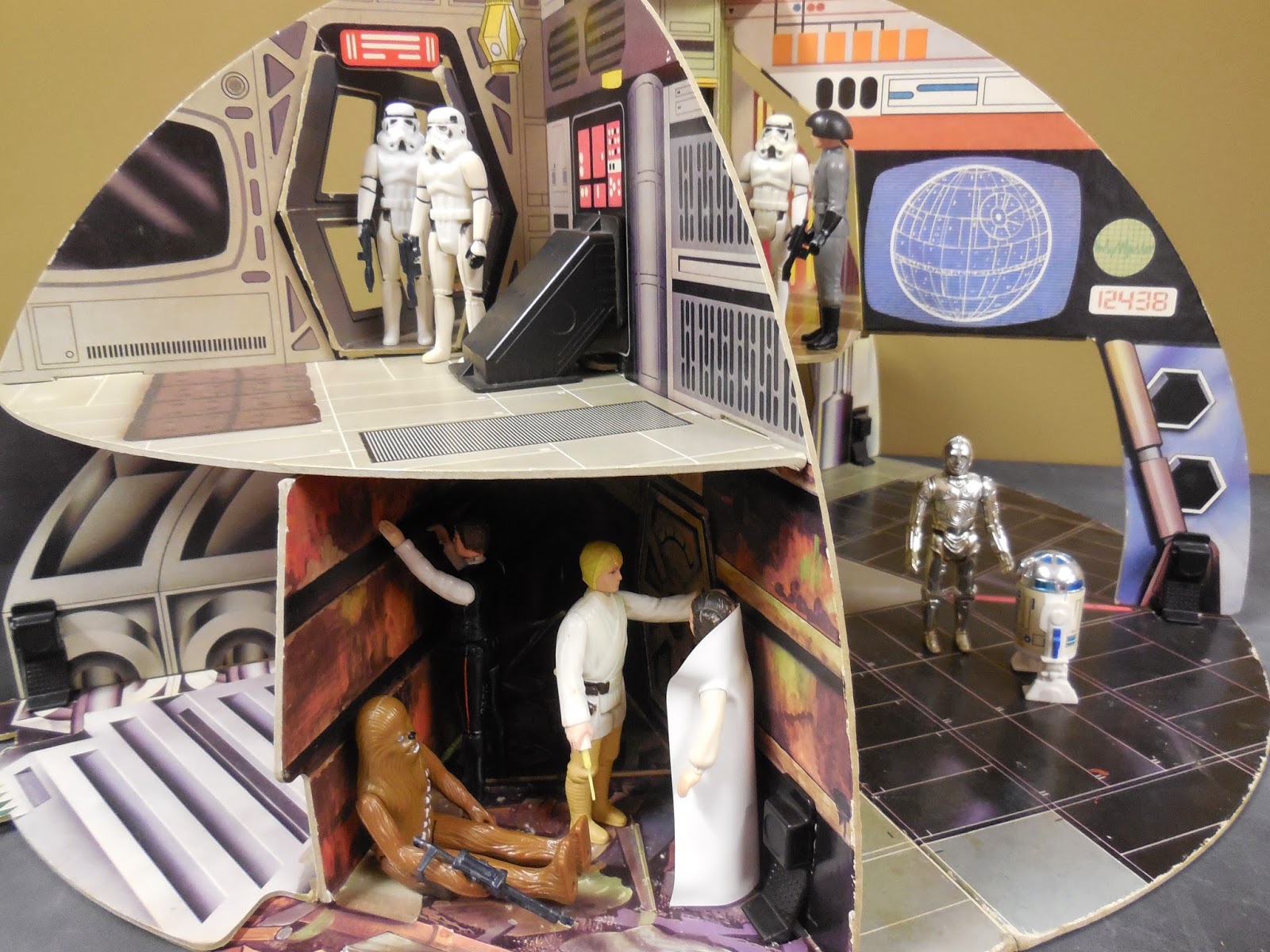 The heroes about to be crushed in the trash compactor...

...or is that Luke just taking the opportunity to mack on Leia? 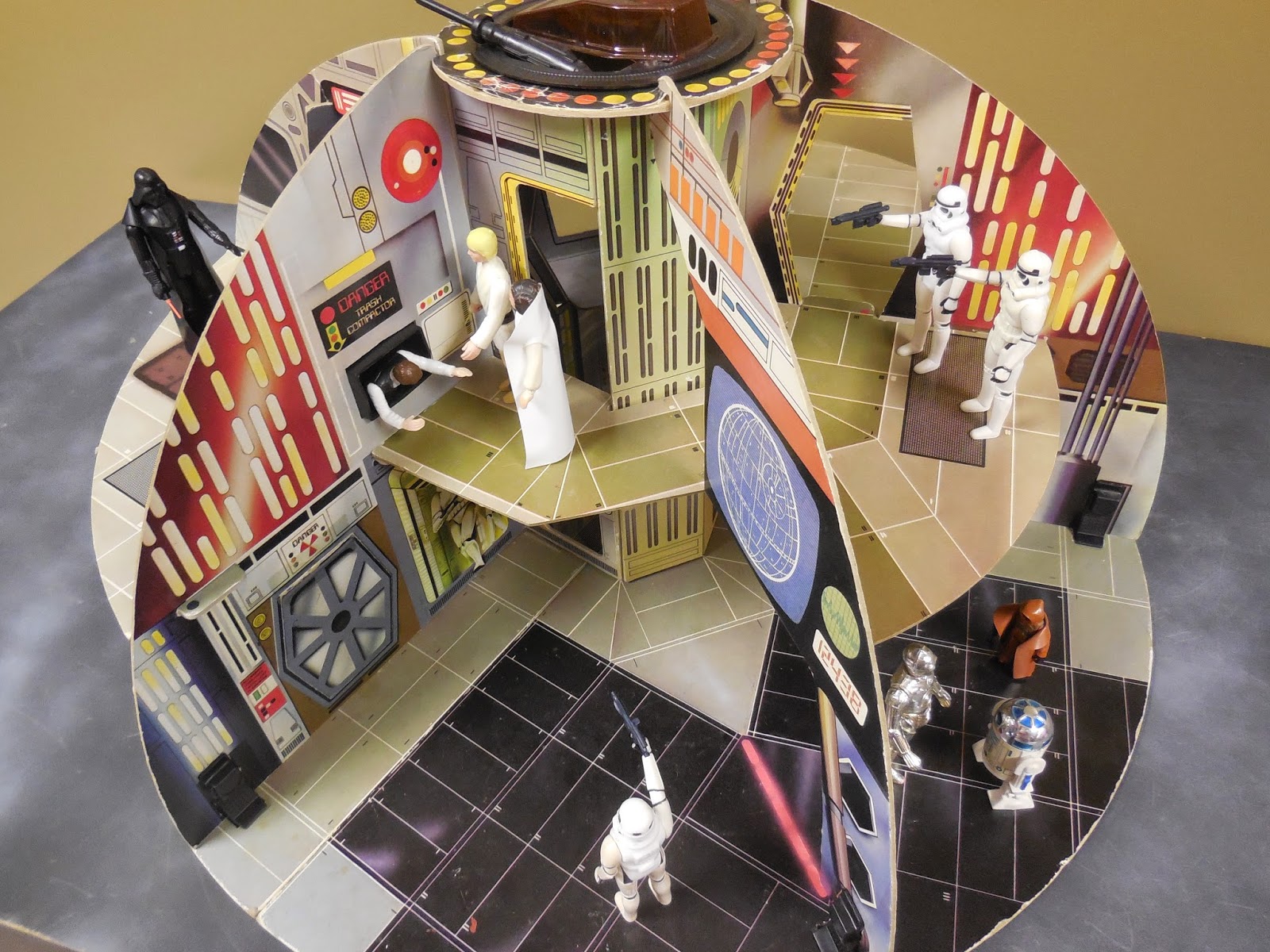 Han takes to the garbage chute as the heroes come under fire from Stormtroopers. What's that Jawa doing on the Death Star?!?!? 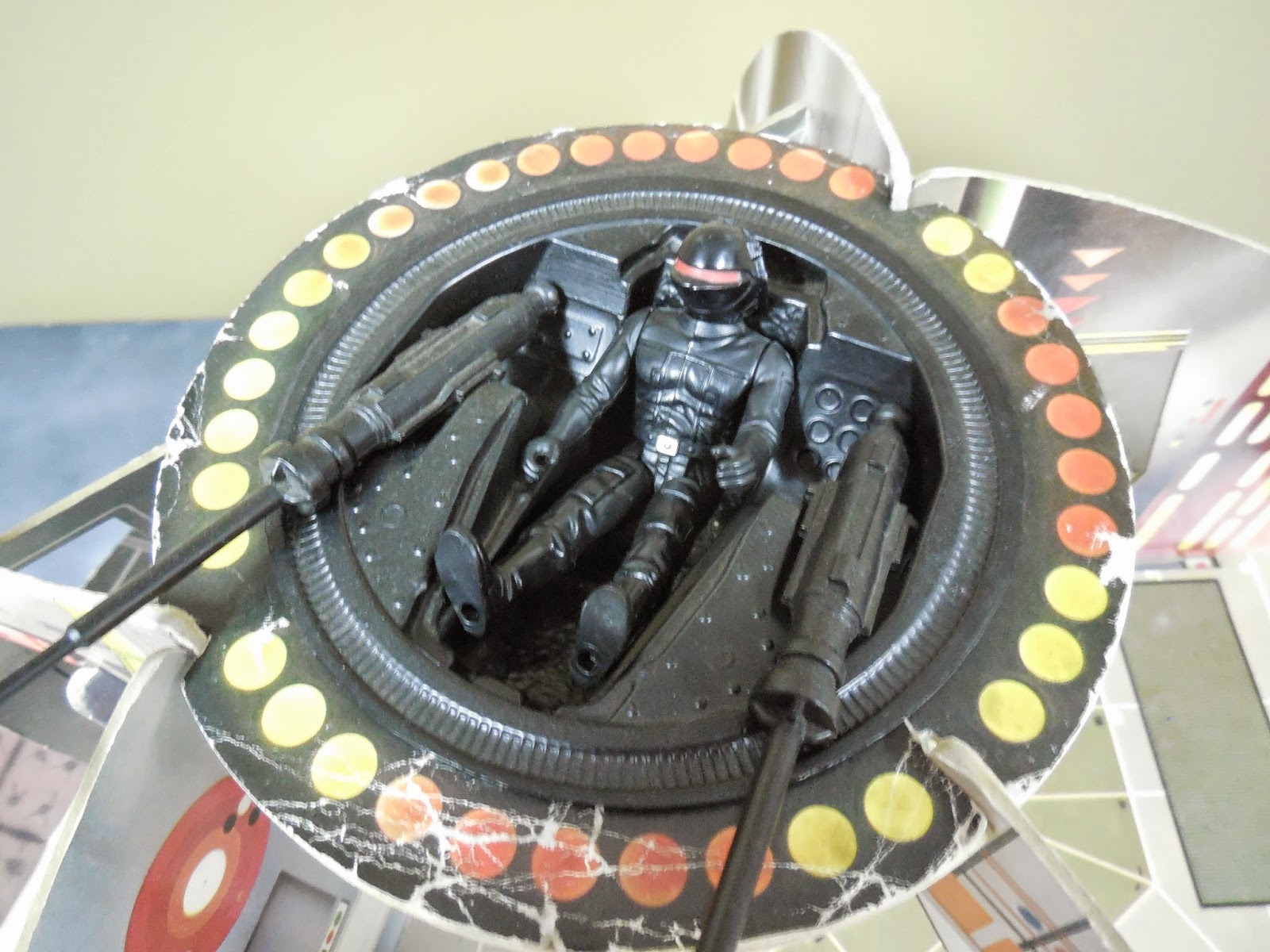 Imperial Gunner finds his rightful place, although he wouldn't be released until the PotF line, six years later... 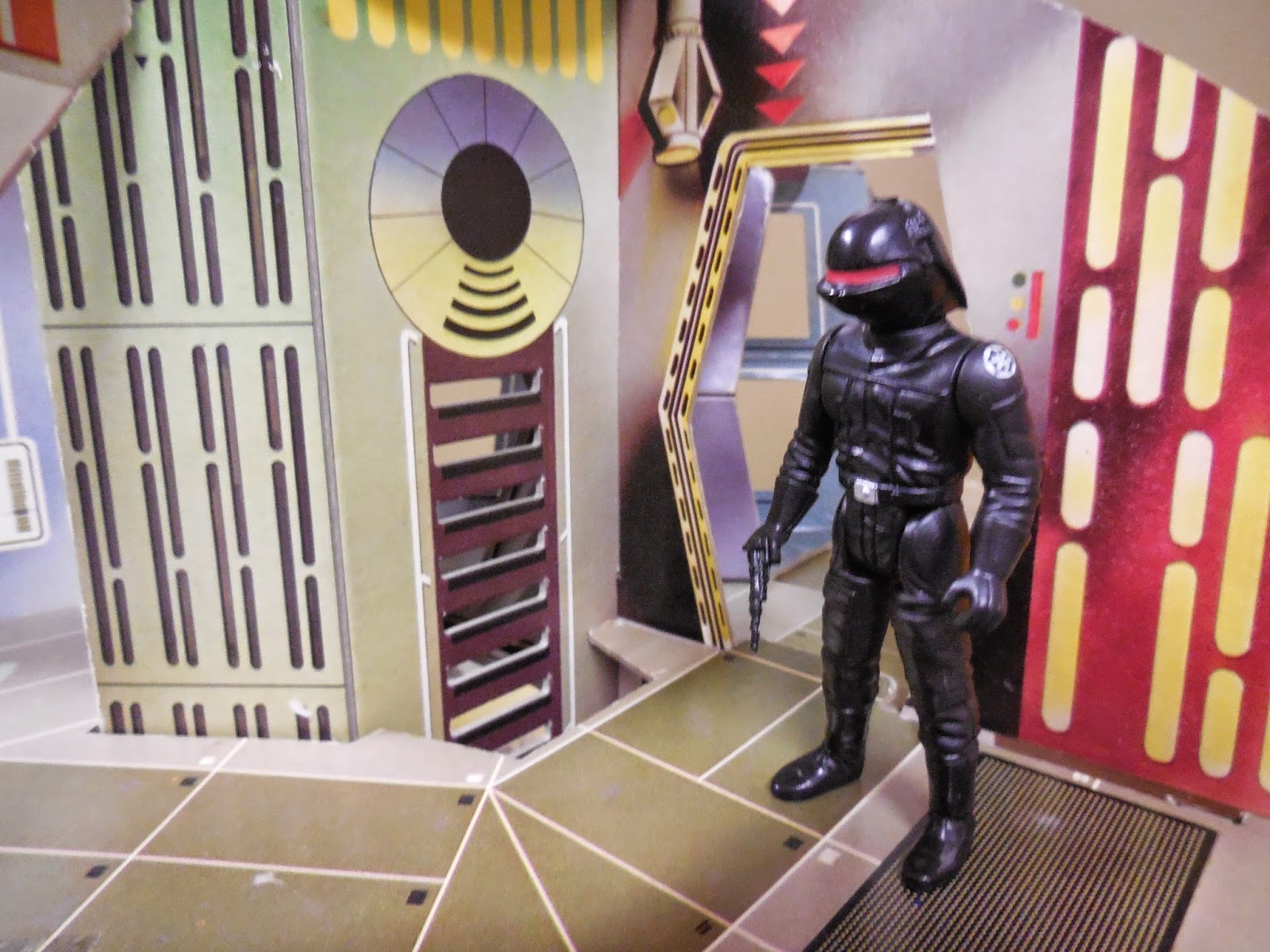 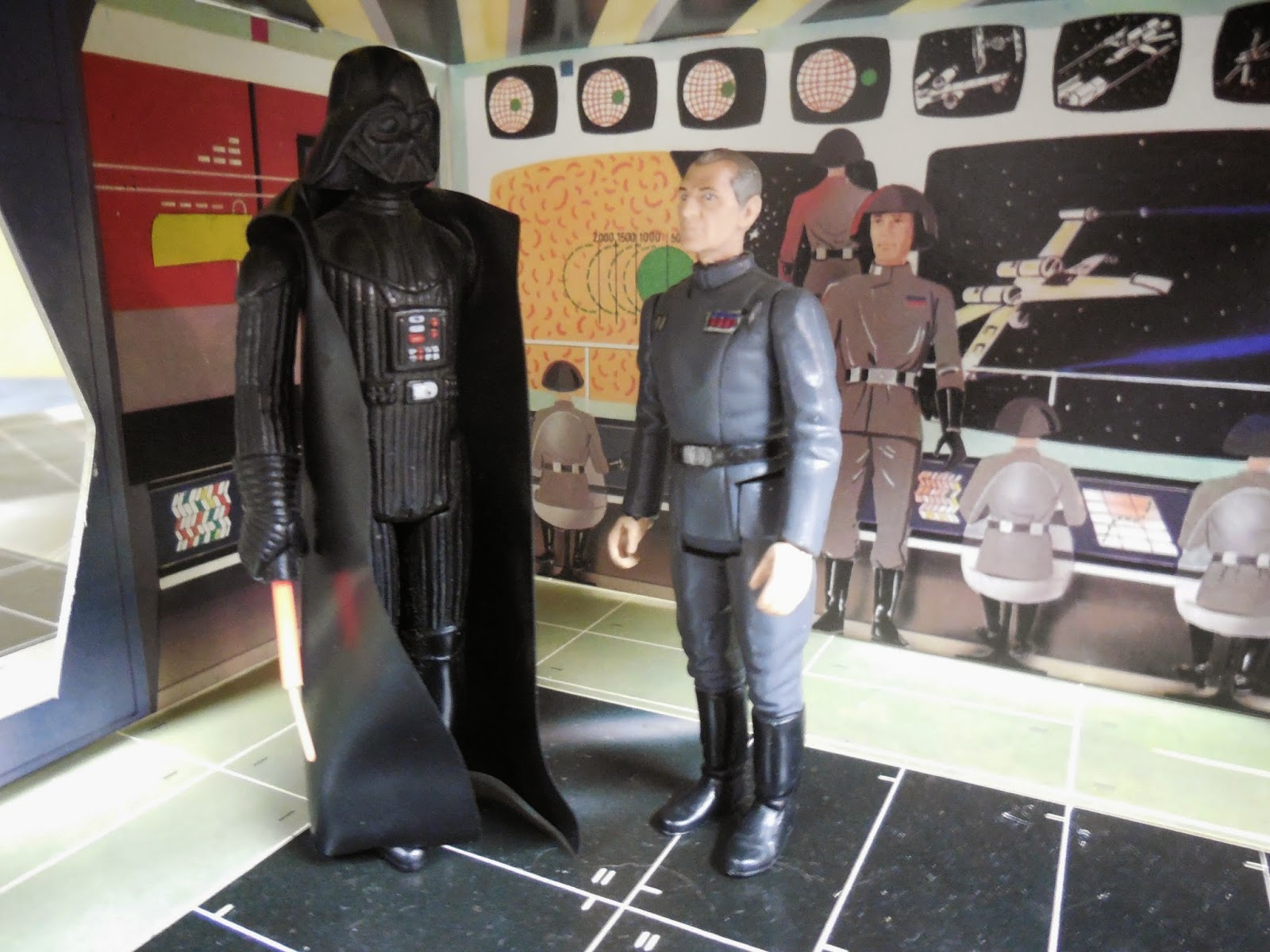 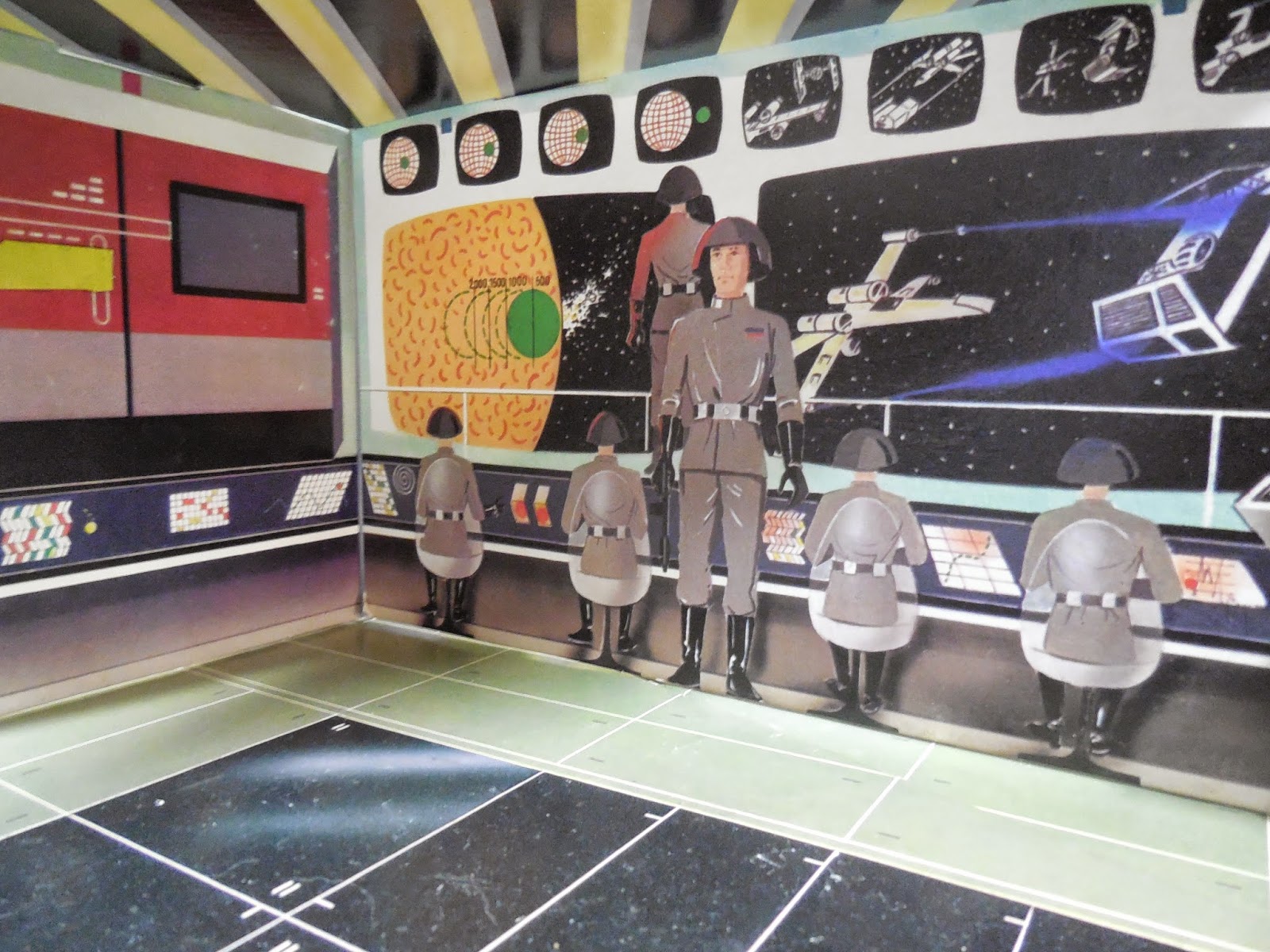 You gotta wonder about Imperial administration when they have a whole room full of Death Squad Commanders and no actual Death Squads in sight. 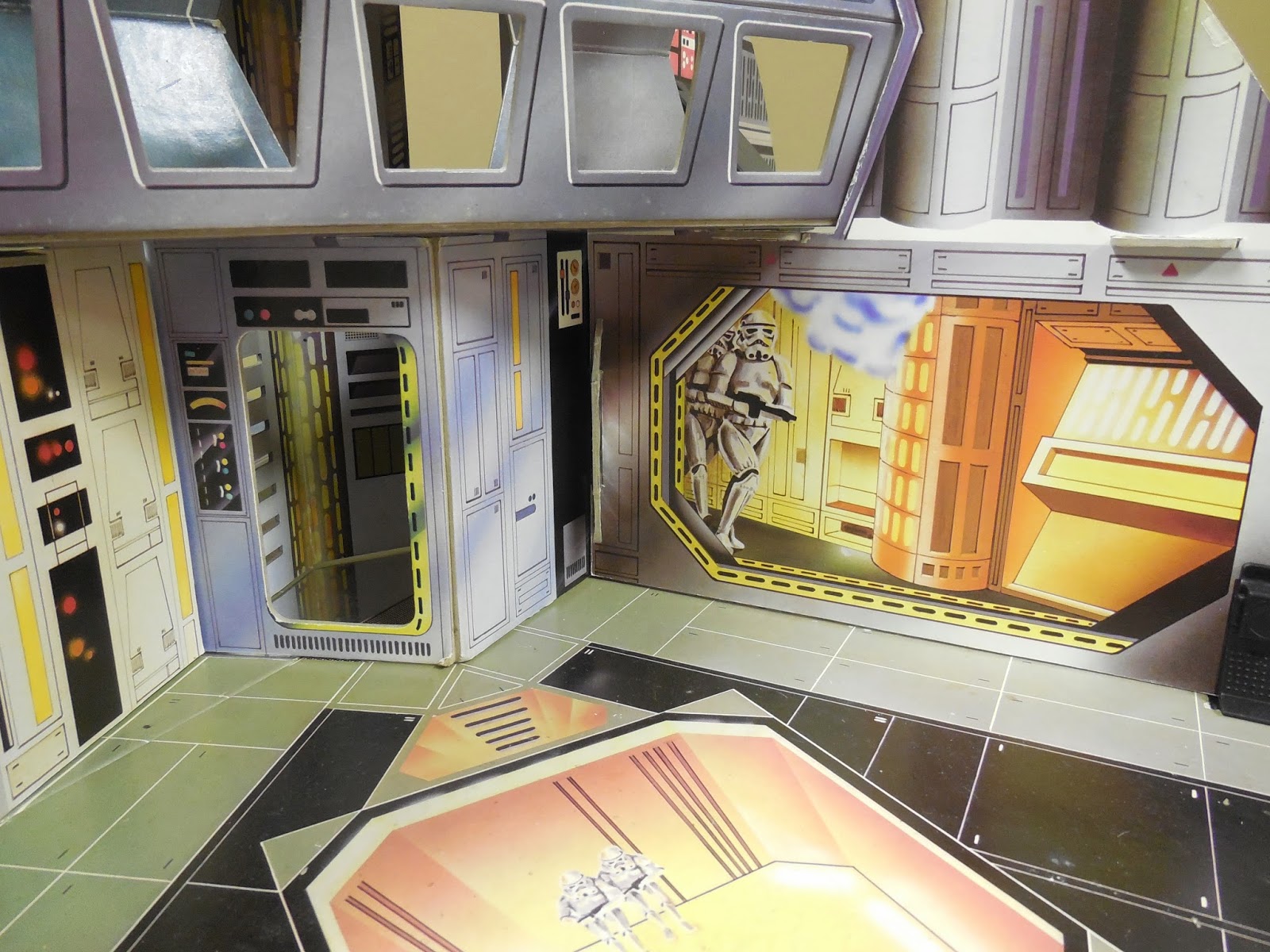 The detailing on this toy is just incredible. 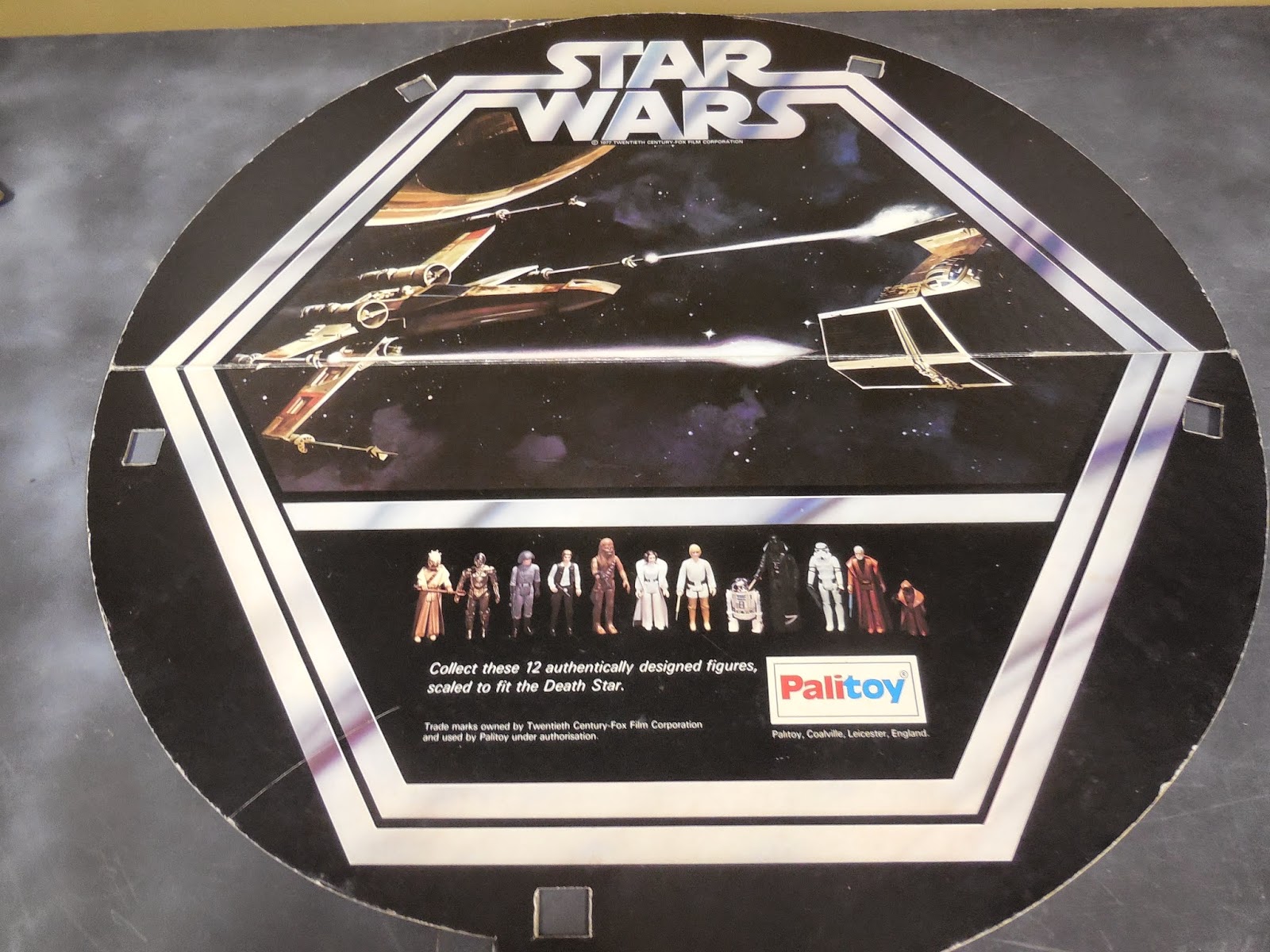 Underside of base is decorated with familiar space battle photo as well as photos of the first 12 figures. Canadian version differs in that it has a plain "marbled" looking base underside.

I think I would have blown my brains out with joy if I'd had this set as a kid. The play value and detailing are just off the charts. The only drawback, of course, is that the cardboard construction is far from robust, which probably contributes significantly to the rarity of these pieces... I expect that most were trashed by kids and subsequently thrown away.

Suffice to say, I'm very happy to have it in my collection :-)  Next up, I'll post the Kenner version!
Posted by Dallas at 8:17 AM 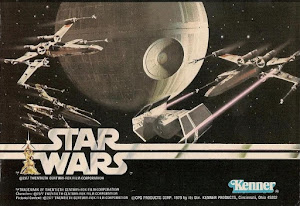